By Blackberry Meadows (other events)

Come enjoy an intimate family friendly evening with American Idol and Mutilple Award Winning Kris Allen in concert at the Lanning Family Farm (i.e. Blackberry Meadows) in Thompson's Station, TN just outside Nashville.  As a special treat, the incredibly talented Senie Hunt will be opening for Kris.  See thier bios below.

The venue is fully heated and air conditioned and all seating is provided.  Check out the pictures of the venue at the bottom of this section.  It's going to be a wonderful evening.

Concessions will be available.

Restrictions: Alcohol, Tobacco, and Vaping Products are prohibited on the property.

If you have questions or need special assistance please email us at [email protected] or call us at 615-414-3867.

Kris is an American singer and songwriter originally from Conway, Arkansas, and the winner of the eighth season of American Idol as well as multiple-time award winner.  Kris continues actively writing and performing.  He and his family happily reside in the Nashville, TN area.

Prior to Idol, he self-released a 2007 album, Brand New Shoes.

Allen's Idol coronation song, "No Boundaries" and his version of "Heartless" both charted within the Top 20 of the Billboard Hot 100. Allen's post-Idol self-titled album was released on November 17, 2009, by Jive Records. The album debuted at number 11 on the U.S. Billboard 200. The album's lead single, "Live Like We're Dying", was released on September 21, 2009, and peaked at number 18 in the U.S. with combined sales of over 1.7 million. Allen's second major-label album Thank You Camelliawas released on May 22, 2012, and the lead single "The Vision of Love" was released March 26, 2012.

In April, he released an EP called Acoustic Tapes which featured songs from throughout his previous albums. Somethin' About Christmas, was released on November 4, 2016. It was supported by the single "Mommy, Is There More Than Just One Santa Claus?" for which he asked fans for photo submissions for the music video. He also recorded a track with Jim Brickman for his album Comfort & Joy called "A Little Bit of Christmas" and joined him for a holiday tour.

In February 2017, he released an acoustic version of his single "Waves" for Valentine's Day. Also that month, he announced he had formed a new band called The Dames. They premiered a song called "The Death of Mr. Jones" in addition to doing a StageIt show. On April 7, 2017, he released a surprise Letting You In acoustic EP which featured a brand new song called "Venice". On May 20, 2017, The Dames released their first song digitally, "The Death of Mr. Jones". The song was the first of six songs to be released that year by the band.

On May 6, 2018, Allen announced on Twitter that he would be joining the American Idol Live! Tour as a special guest. The tour kicked off in Redding, California, on July 11. Allen also released a new single, "When All The Stars Have Died," on June 29, 2018. On September 20, 2019, Allen released 10, which consisted of reworked versions of songs from his previous albums. The album title referenced that it had been ten years since Allen won American Idol and began his music career.

Senie Hunt is a self-taught, singer-songwriter and percussive guitarist adopted from Sierra Leone. He brought with him an inherent passion for West African rhythms and percussion. Senie used djembe drumming as a creative outlet to process the traumas of his early childhood during Sierra Leone’s Diamond wars.

Senie’s US family owned a world-instrument import business and shared his love of music. With the help of his adoptive father, an amateur guitarist, Senie began to play the instrument at the age of 7. He learned most of what he knows through watching footage of live concerts of early influencers, like Stevie Ray Vaughan, B.B. King, and The Allman Brothers. As he learned guitar, Senie’s rhythmic instincts led him to experiment with drumming on the guitar as a way to capture the sound and rhythms of his West African roots. His experimentation lead him to his later influences such as Tommy Emmanuel, Michael Hedges and Andy Mckee.

As a teen, Senie attended Berklee’s summer music camp in Boston, and local music camps in New Hampshire. During college he enrolled in several music programs to understand music beyond its performance aspects. Senie quickly found that his work does not fit a traditional approach or style. After struggling to conform to the music school curriculum he left college to pursue music in his own way.

Senie’s playing is eclectic, powerful and artfully unique. This original approach and performance style, especially his unique percussion and live looping, sets Senie apart from other acoustic guitarists. Senie composes continuously and has a large body of work for one so young. In 2020, he was awarded the Innovators award at the GSM Music Awards for his guitar mastery, and was nominated for best male act of the year by the New England Music Awards in 2021. He has featured as the opening act and shared the stage with several well established artists such as the legendary Richard Thompson, The Wailers, The Levin Brothers, Robert Randolph, The Brooks Young Band, Daby Touré and Recycled Percussions. 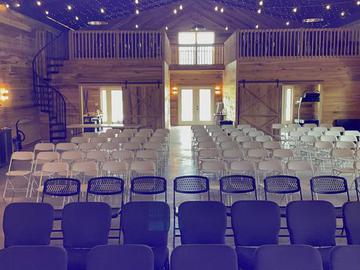 Alcohol, Tobacco, and Vaping Products are prohibited on the property.

other events by this organization